UltraViolet Action to Sen. John McCain: “Thank You for Protecting Our Care”

GLENDALE, ARIZONA —  On Monday, September 25th, UltraViolet Action, a leading women’s advocacy  organization, will fly a plane over the University of Phoenix stadium prior the the Cardinals v. Cowboys football game thanking Senator John McCain for his opposition to the Graham-Cassidy health care repeal bill.

According to experts, the Cassidy-Graham proposal would eliminate the Affordable Care Act’s tax subsidies, end protections for pre-existing conditions, defund Planned Parenthood, end the law’s individual insurance mandate, and end Medicaid as we know it.

WHERE: University of Arizona Stadium,Glendale, Arizona

THE PLANE BANNER WILL READ:  MCCAIN: THANKS 4 PROTECTING OUR CARE (Photos Here)

In July, Senator McCain voted against repealing the Affordable Care Act, after months of public pressure from UltraViolet and several organizations.  His vote was critical to protecting the health insurance of millions of Americans, including 511,000 people in Arizona.

“Earlier this year, Senator McCain stood strong for Arizona families in opposing the Republican efforts to dismantle the Affordable Care Act and taking a wrecking ball to our country’s healthcare system. On Friday, he did so again.  Thank you, Senator McCain for protecting our care.” explained Nita Chaudhary, co-founder of UltraViolet Action.

UltraViolet Action is an online community of over 1,000,000 people who want to take collective action to expose and fight sexism in the public sector, private sector and the media. Find out more at WeAreUltraViolet.org 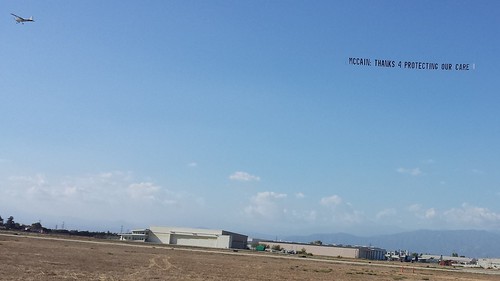