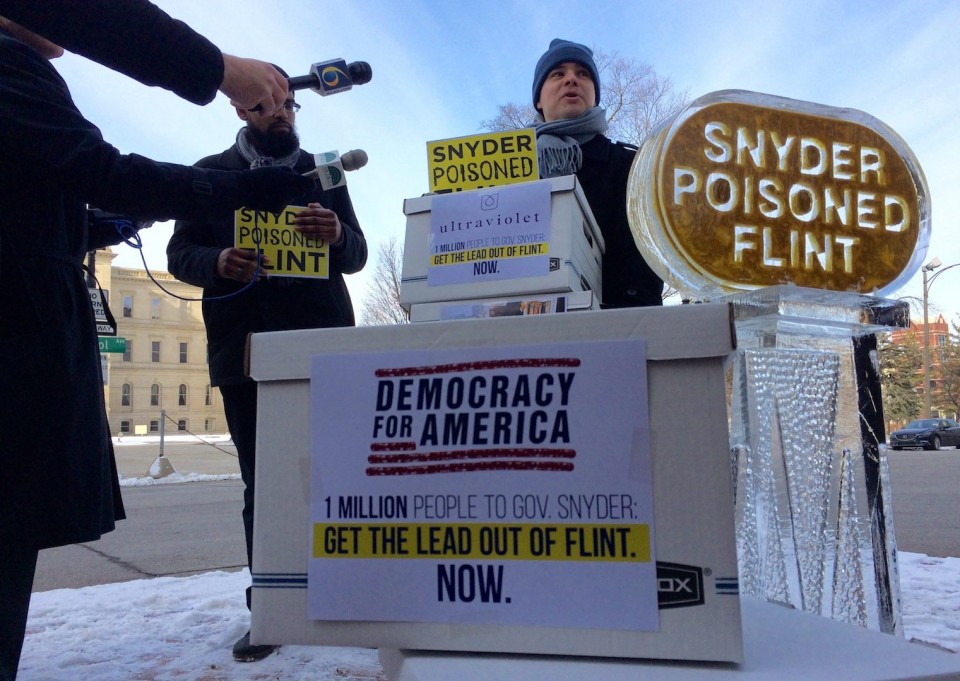 LANSING, MICHIGAN — On Thursday, February 18th, UltraViolet, MoveOn.org and Democracy for America will rally outside Governor Rick Snyder’s office in Lansing to deliver the signatures of nearly 1 million concerned Americans demanding the Governor immediately resign, face investigation and, if warranted, prosecution for his gross mishandling of Flint’s contaminated water, knowingly exposing tens of thousands of kids and families to life-long lead poisoning.

At the rally, members of UltraViolet and signatories of Michael Moore’s MoveOn petition will place an “dirty” ice sculpture, tinted brown like the water in Flint, and reading “Snyder Poisoned Flint.” The ice sculpture will be placed in front of the executive building, facing the capital.

“Governor Snyder is a criminal disguised as a public servant. It is clear he knew that Flint’s water was poisoned for at least a year and shipped in bottled water for state employees, all while ignoring the concerns of Flint’s worried, mostly poor and Black, residents,” explained Shaunna Thomas, co-founder of UltraViolet, a national women’s advocacy organization. “Snyder’s actions have resulted in more than ten thousand children and pregnant women being exposed to dangerously toxic levels of lead that will cause severe brain, nervous system and liver damage for their entire lives. This is unforgivable. Snyder must immediately resign and face criminal prosecution for poisoning the kids and families of Flint.”

“Flint’s water has been poisoned for more than 660 days. Flint Mayor Karen Weaver has a plan to replace the city’s lead pipes, beginning right now,” said MoveOn.org Campaign Director and Michigan resident Mark Crain. “We’re calling on Governor Snyder to do his part and act immediately to secure all the necessary funds to get new pipes throughout all of Flint.”

“We demand an investigation and, if warranted, the arrest and prosecution of Michigan Governor Rick Snyder. The governor must be held accountable for poisoning the children of Flint, fraud, political corruption, and for covering up the actions of his administration,” added renowned filmmaker Michael Moore.

“I live in Grosse Pointe and there’s not a doubt in my mind that if Governor Rick Snyder had presided over the poisoning of children in my community and its cover up, he’d be out of office and wearing a state-issued jumpsuit right now,” said Neil Sroka, Communications Director of Democracy for America and Michigan resident.

“What Governor Rick Snyder did to the children and families of Flint isn’t just a national scandal, it’s a crime he must be held accountable for and that’s why hundreds of thousands in Michigan and throughout the country have signed this petition,” Sroka continued.