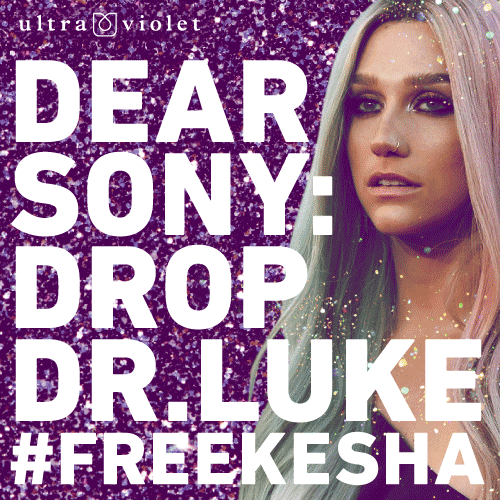 UltraViolet, a national women’s advocacy group, has launched a new Pandora radio ads campaign targeting pop music listeners over Sony Music’s continued relationship with Dr. Luke’s Kemosabe Records.  The ads, part of a larger #FreeKesha campaign, discuss how the pop-star is being forced to work with Dr. Luke, her abuser, something that no survivor should ever have to go through.  The ads will run nationally from March 28th through April 2nd and urge Sony to #FreeKesha, take a stand against rape culture, and drop Dr. Luke’s Kemosabe Records.

LISTEN TO THE ADS HERE:  http://act.weareultraviolet.org/sign/uv_sony_kesha_ad/

TRANSCRIPT OF THE ADS BELOW:

The life of a pop star: fame, glamour, excitement, (music cuts out) rape.

Kesha is being forced to work with Dr. Luke, her abuser, something no survivor should have to go through.

Sony can #FreeKesha and take a stand against rape culture.  Tell Sony to drop Dr. Luke!

Last month, the New York State Supreme Court decided against Kesha ruling that if she hoped to continue making music she would have to continue working with Dr. Luke, a man who she claims sexually harassed and assaulted her.  Two weeks ago, The Wrap, citing Sony insiders said that the music giant plans to drop Dr. Luke’s Kemosabe Records, but Sony Music has yet to issue an official comment on the matter.  In 2011, Dr. Luke and Kemosabe Records signed a five-year deal with Sony Music, and that deal expires in 2016.

The ads argue that no survivor should be forced to work with her abuser, continuing to relive the trauma of assault, and that Sony Music should not reward Dr. Luke for his crime by continuing to keep his company, Kemosabe Records, affiliated with Sony Music Entertainment.

“Kesha has been struggling for years to be free from the influence of her abuser – and that struggle is still ongoing.  While reports from unnamed insiders have implied that Sony Music is exploring ways to cut ties to Dr. Luke’s Kemosabe Records, short of a public announcement from Sony Music CEO Doug Morris, only one thing remains true: Kesha isn’t free,” explained Nita Chaudhary, co-founder of UltraViolet. “It is long past time that Sony Music executives – including CEO Doug Morris – declare once and for all that they stand with Kesha, and survivors of sexual assault by dropping Dr. Luke’s Kemosabe Records.  Only then, will it be clear to music fans, performing artists and the world – that rape and sexual assault will never be tolerated at Sony Music.”

Earlier this month, more than 31,600 members of UltraViolet called on Sony Music CEO Doug Morris to permanently cut ties with Dr. Luke and not renew their contract with Kemosabe Records this year.