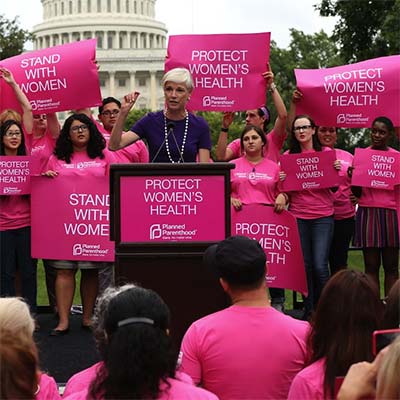 National women’s group UltraViolet is out today slamming the two Democratic members of Congress who voted late Friday to defund Planned Parenthood, and calling on the Democratic Congressional Campaign Committee to eliminate funding for the two reckless Democrats immediately. The group also has Facebook and Twitter ads up in home districts of both Dan Lipinski (IL-3) and Collin Peterson (MN-7) slamming the Dems for their anti-woman antics.

See the just-launched petition to the DCCC: http://act.weareultraviolet.org/sign/PPFA_Democrats/

“The DCCC needs to take a stand for women by defunding Representatives Lipinski and Peterson immediately,” said Shaunna Thomas, co-founder of UltraViolet. “We are appalled that Representatives Lipinski and Peterson have thrown women under the bus and voted to defund Planned Parenthood, but we are more appalled that the DCCC has yet to defund them. These men continue a long tradition of older, out of touch white men trying to force medical decisions on women they think can’t be trusted. This will not stand: The Democratic Party, and the DCCC, have been built on the support of women, and they cannot count on that support if they don’t stand up for us in this time of need.”

UltraViolet members have also been calling the offices of Lipinski and Peterson since the vote late Friday to express their deep concerns.

For more information, or for interviews with UltraViolet, please contact Molly Haigh at 907-750-1999 or molly@fitzgibbonmedia.com.