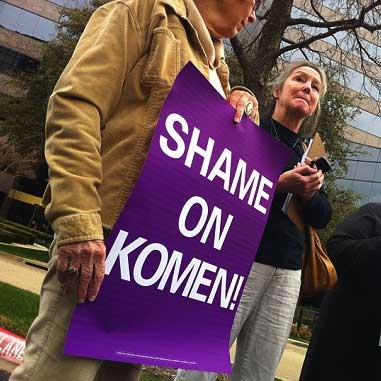 Progressive campaigners and online activists Nita Chaudhary and Shaunna Thomas had an idea for a new kind of women’s rights group: one that uses cutting-edge online advertising techniques to engage more people in the fight to end sexism in politics, media and pop culture. They were not quite ready to launch their project, called UltraViolet, and their website was not yet running when the news broke that Susan G. Komen for the Cure had pulled cancer screening grants from Planned Parenthood over abortion politics. Feeling that this could be their moment to grab women’s attention, Ultraviolet leapt into action, launching its first campaign with Moveon.org to call on Komen to reverse its decision and gathering 60,000 signatures in just a few hours.