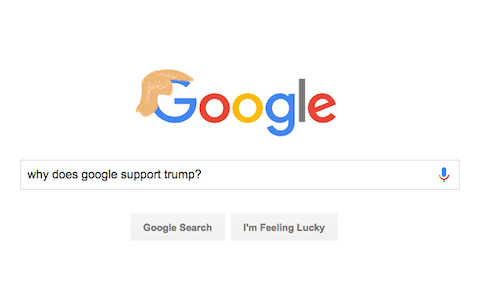 In response to Google’s official announcement of a live-stream partnership with the Republican National Convention this Summer in Cleveland, UltraViolet Action, a national women’s advocacy organization, has launched a new Google Chrome extension app that fits all Google logos on the user’s web browser with a Donald Trump-like hairstyle.  The extension also replaces instances of Google’s name with Trump-ified monikers like “Trump’s BFF for Life,” and replaces Trump with jokes like “Donald ‘Tiny Hands’ Trump.”

Last week, prior to Google’s announcement of an official partnership with the Republican National Convention, activists from UltraViolet delivered more than 500,000 signatures to Google headquarters urging the internet giant to distance themselves from Trump’s hate.  At the same time a plane flew over Google headquarters and downtown San Francisco reading, “Google.  Don’t be evil.  #DumpTrump”

“Google is a company that claims to value diversity, mutual respect and not being evil. But Google’s announcement that they will be the official livestream partner of the Republican National Convention puts them squarely in line with those that seek to divide us and spread hate.  Plain and simple – Donald Trump, the prospective Republican Party nominee, has lobbed racist, sexist and xenophobic attacks against entire groups of people, encouraged violence and vitriol against his political enemies and perpetuated a culture of violence against women throughout his campaign,” explained Karin Roland, Chief Campaigns Officer for UltraViolet Action. “We are saddened to see Google not only eagerly align themselves with these values, but to actively work to promote them via their live-stream capabilities.

“UltraViolet Action’s more than 700,000 members in the US will continue to press Google to live by their motto of “don’t be evil” and pull their support from the Republican National Convention this summer,” added Roland.