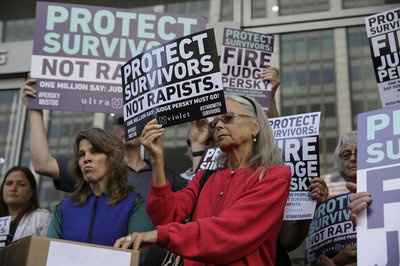 WED 11AM: Activists Rally at California Commission on Judicial Performance HQ With Giant Pink Slips Demanding Removal of Judge Persky from the Bench

SAN FRANCISCO, CALIFORNIA — On Wednesday, August 24th, activists from UltraViolet, a national women’s advocacy organization, will rally outside the California Commission on Judicial Performance with giant pink slips calling for the removal of Judge Persky from the bench over his failure to properly provide justice for the survivors of rape, sexual assault and domestic violence.

At the rally, UltraViolet members will read aloud portions of Emily Doe’s letter to the Court in which she detailed the impact that rapist Brock Turner had on her life.  UltraViolet members will also deliver the pink slips reading “Notice of Termination. Reason: Protecting Perpetrators, Not Survivors. #PerskyMustGo” to the Commission.  Brock Turner is set to be released from prison on September 2nd.

WHAT: Delivery of Stanford Survivor Letter and Pink Slips to CA Commission

Earlier this week, Judge Persky recused himself from his first sex-crimes case since the Turner ruling.  In that case, Judge Persky said that he would be open to reducing a felony conviction for possession of child pornography to a misdemeanor charge.

“Case after case, Judge Persky has allowed his own personal bias to distort the criminal justice system to the benefit of privileged men – rapists, abusers and possessors of child porn – over the survivors of their crimes,” explained Nita Chaudhary, co-founder of UltraViolet.  “We need judges that support survivors of rape and domestic abuse and provide justice for the crimes committed against them. That’s why more than 1 million UltraViolet members from California to Florida continue to call on the California Commission on Judicial Performance to remove Judge Persky from the bench – and ensure that all survivors of sex crimes get the justice that they deserve.”