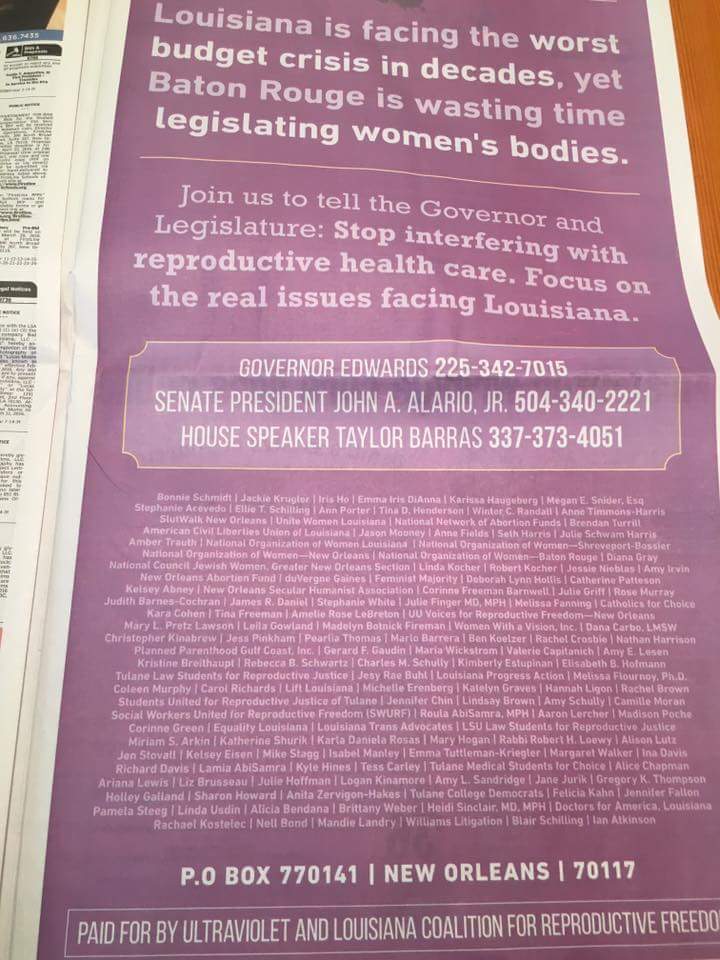 LOUISIANA — In response to an array of anti-women legislation pending in the Louisiana State Legislature that would dramatically limit access to reproductive healthcare, UltraViolet, the Louisiana Coalition for Reproductive Freedom, and Choice Louisiana have taken out ads in two Louisiana newspapers – The Baton Rouge Advocate and The Shreveport Times – calling out the State’s elected officials for prioritizing attacks on women’s health over the worst budget crisis in Louisiana’s history.

Against the backdrop of an intractable budget crisis, members of the State House and Senate have proposed more than a dozen bills that would impose severe restrictions on abortion providers and women seeking abortions in Louisiana. HB606 and SB264, both championed by Democratic Governor John Bel Edwards, would be particularly onerous for Planned Parenthood facilities in the State – forcing thousands of Louisiana women to seek health care access elsewhere.

“Louisiana is facing the worst budget crisis in decades, yet politicians in Baton Rouge are wasting time trying to legislate women’s bodies instead of dealing with the real issues facing the State,” said Shaunna Thomas, co-founder of UltraViolet. “When voters went to the polls last November and elected Democrat John Bel Edwards, they hoped he would keep his pledge to be ‘a healthy dose of common sense and compassion for ordinary people.’ It is now clear that Governor Edwards is just more of the same – a politician who avoids dealing with the serious crisis facing Louisiana and instead imposes onerous restrictions on the rights of ordinary women in the State.”

“Louisiana residents entrusted their elected officials to address an historic budget crisis. They did not, resulting in a $30 million shortfall, which certainly will lead to additional cuts in higher education and healthcare across the state,” said Amy Irvin, Executive Director of the New Orleans Abortion Fund. “What’s most irresponsible is that our governor and a few legislators took valuable time away from the issues most important to voters to craft anti-choice legislation that will further harm the most vulnerable women and families in our state.”

UltraViolet is an online community of over 700,000 women and men who take collective action to expose and fight sexism in the public sector, private sector and the media. Find out more at WeAreUltraViolet.org.