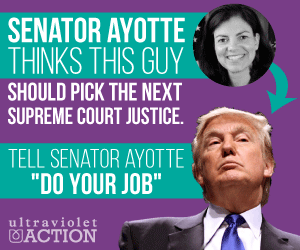 WASHINGTON, DC — UltraViolet Action, a national women’s advocacy organization, is launching a new online ad campaign targeting Republican Senators from Iowa, New Hampshire, Ohio, Pennsylvania and Wisconsin linking them to Donald Trump, and asserting that they want Trump to be responsible for picking the next Supreme Court justice.

The online ads, part of a five-figure buy, will run on Facebook, Twitter and Instagram on Capitol Hill and in the Senator’s home states and are part of an effort by UltraViolet Action urging Senators to “do their job” and stop picking and choosing their responsibilities.

“The American people are tired of the same-old Republican politics that puts partisanship and obstruction ahead of the Constitution and what’s good for the country. Worse, by refusing to fulfill their constitutional responsibilities and consider an Obama nominee, it is clear that these Republicans would rather Donald Trump be responsible for picking the next Supreme Court justice.” explained Nita Chaudhary, co-founder of UltraViolet Action. “That incredibly dangerous decision sends a clear signal to voters that Senate Republicans, under the leadership of Mitch McConnell are both unfit, and unwilling to serve the best interests of the American people. The Senate must stop undermining our democracy, fulfill their constitutional duties and vote on whomever President Obama nominates for the Court.”