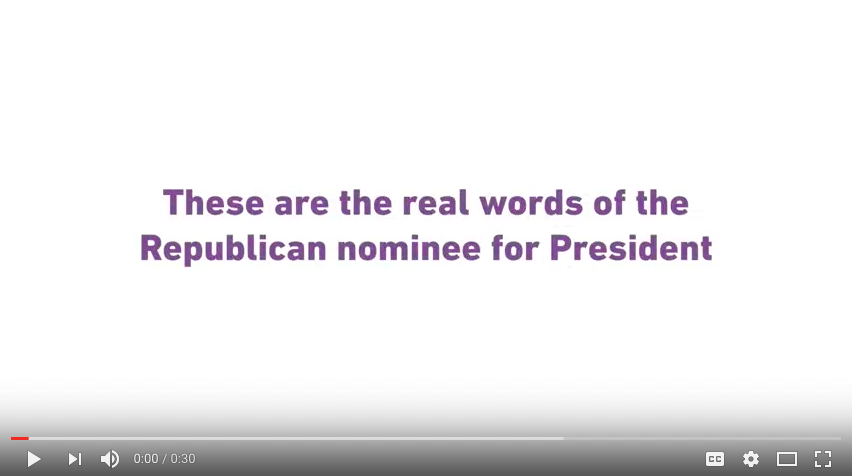 FOR IMMEDIATE RELEASE: Saturday, October 8, 2016
CONTACT:  Brett Abrams | 516-841-1105 | brett@unbendablemedia.com
New TV Spot Slams Donald Trump for Bragging About Sexual Assault & Groping Women in 2005 Video
Women’s Group Says Donald Trump is Dangerous for Women, Dangerous for America
UltraViolet Action, a national women’s advocacy organization, is releasing a new 30-second TV ad to run in swing states this week that slams Republican Presidential Donald Trump for bragging about sexually assaulting and groping women to Billy Bush in a 2005 video.  The video, made public by The Washington Post late Friday, included Trump saying comments like “grab them by the p***y” and “when you’re a star, they let you do it.”
VIEW THE AD HERE: https://www.youtube.com/watch?v=GSLQRGxD6pQ&feature=youtu.be
“Donald Trump is a dangerous, predatory misogynist and the living embodiment of rape culture – asserting he has the right to assault women because he’s famous and a celebrity.  While these comments aren’t surprising from a man who has built his life off denigrating women, they are further proof that he is wholly unqualified to be President and should never be allowed to step foot in the White House,” said Shaunna Thomas, co-founder of UltraViolet Action.
UltraViolet Action has also commissioned a plane carrying a banner reading: “Trump assaults women. Outraged? Vote” to fly over the Bank of America Stadium in Charlotte, NC, on Monday night when the Tampa Bay Buccaneers play the Charlotte Panthers.  The plane urges football fans to vote against Trump this November.
# # #
UltraViolet Action is an online community of over 1,000,000 women and men who want to take collective action to expose and fight sexism in the public sector, private sector and the media. Find out more at WeAreUltraViolet.org.