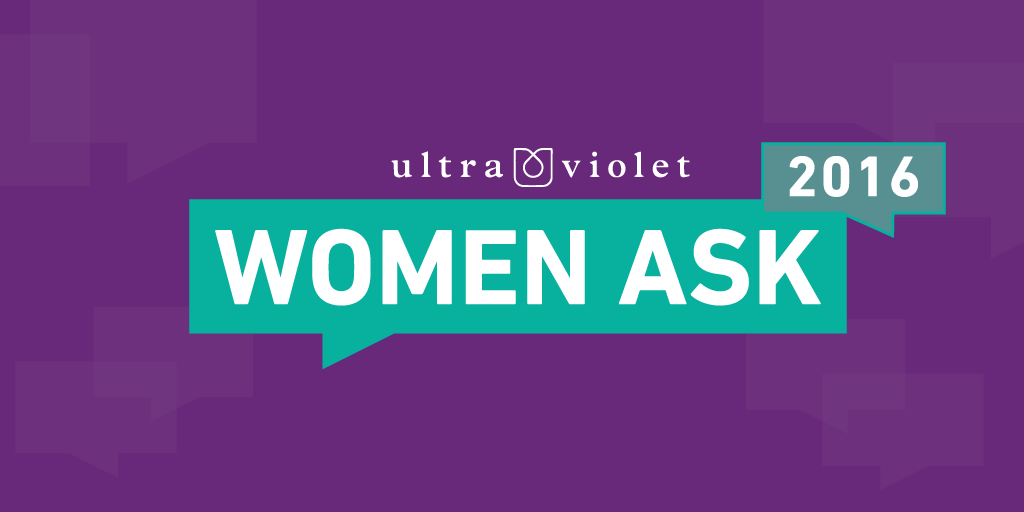 FOR IMMEDIATE RELEASE: Wednesday, September 21, 2016
CONTACT: Brett Abrams | 516-841-1105 | brett@unbendablemedia.com
UltraViolet’s WomenAsk2016 Crowdsources Top Questions Women Want Answered at the Presidential Debate
Group Asks Debate Moderator Lester Holt to Ask About Keeping Guns Out of the Hands of Domestic Abusers, Abortion Access Abortion at the 1st Presidential Debate
Today, UltraViolet, a community of one million women and men mobilized to fight sexism and expand women’s rights, released a letter addressed to debate moderator Lester Holt, calling on him to ask questions in the September 26th presidential debate that highlight the major issues facing American women. The letter specifically calls on Holt to ask questions about women’s health care and access to abortion, preventing domestic abusers from getting guns, affordable child care and equal pay for women.
The letter aims to remedy the unprecedented sexism the media has portrayed throughout the presidential campaign and the lack of coverage of issues that primarily impact women during the election cycle, particularly with the nomination of the first woman to a major party ticket.
SEE THE LETTER TO LESTER HOLT HERE: https://s3.amazonaws.com/s3.weareultraviolet.com/images/lettertoNBCHolt.pdf
Earlier this month, UltraViolet launched WomenAsk 2016, an online portal that encouraged voters to submit questions that they would want to hear from the debate moderators during the Presidential debates. With over 1,000 questions submitted, and over 45,000 votes cast in the online forum, some of the top questions that emerged included:

“With the first female major party candidate in history, women’s issues and sexism have played a huge role in the presidential election so far this year. We simply cannot afford for Presidential debate moderators to continue ignoring the issues that are most important to American women,” explained Nita Chaudhary, co-founder of UltraViolet. “Lester Holt and the rest of the presidential debate moderators have the power to shed light on the most paramount issues facing the largest voting segment of the population: women. Yet the media seemingly continues to discount crucial topics that affect women the most.”
“From equal pay, to abortion access, to basic protections for survivors of domestic violence and sexual assault – the media has consistently dropped the ball on issues important to women voters. It’s time to stop ignoring these critical topics. The moderators of the 2016 presidential debates need to listen to women and ask the tough questions that matter to more than half of America’s electorate,” added Chaudhary.
On Monday, just one week before the first presidential debate between Secretary Hillary Clinton and Donald Trump, UltraViolet commissioned a mobile billboard that circled NBC News’ DC office, as well as the Commission on Presidential Debate headquarters demanding that 2016 debate moderators ask questions on the major issues facing American women. The mobile billboard read,“Tell the 2016 Debate Moderators: Cover Women’s Issues.”
VIEW OUT THE BILLBOARD AD COPY HERE: https://s3.amazonaws.com/s3.weareultraviolet.com/images/uv-debate-truck.pdf
# # # # #
UltraViolet is an online community of over 1,000,000 women and men who want to take collective action to expose and fight sexism in the public sector, private sector and the media. Find out more atWeAreUltraViolet.org