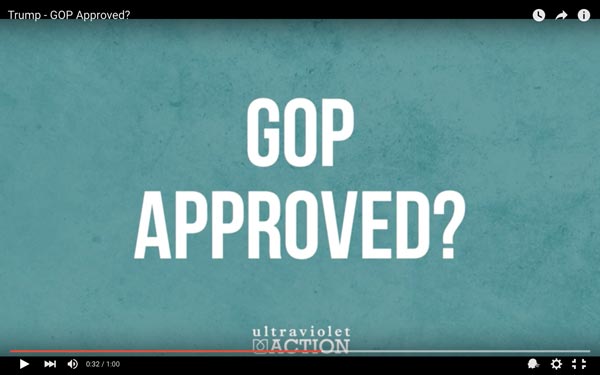 A new video released today from UltraViolet Action calls attention to some of Donald Trump’s most vitriolic attacks on women (some from just this week) and links the Republican frontrunner to other members of the GOP who have expressed support for Donald Trump.

The video features Trump criticizing women for their physical appearances, victim-blaming a reporter after her experience of physical abuse at one of his press conferences, stating that women should be punished for receiving abortions, and ends with video endorsements of Trump’s campaign by members of the Republican Party – including Speaker of the House Paul Ryan, Senator Mark Kirk, Senator Kelly Ayotte, and Senator John McCain.

“Throughout this election, Donald Trump has continued to push past the boundaries of common decency and core American values – encouraging racist and sexist attacks on his political enemies and perpetuating a culture of violence against women.  Through both action and rhetoric, Trump has made his sexist views, violence against women and a misogynistic culture abundantly clear – and these views thoroughly disqualify him from serving as President,” explained Nita Chaudhary, co-founder of UltraViolet Action.  “Which is why the Republican Party’s continued support for Trump is especially disturbing.  Republican Party leaders – from Senator Mark Kirk, Senator Kelly Ayotte, Senator John McCain to Speaker Paul Ryan – have continued to stand by Trump, going so far as to say they would openly support him if he were the Republican party’s nominee.  This stamp of approval only deepens the impact of Trump’s hate, and puts millions of American women in danger.”